I've been playing around in the junk box and come up with this simple SSB transmitter and SDR receiver.

Here are a couple of videos.

The first is the TX.

The second the RX.

I'm having a happy 2020😀hope you are too. My first EME contact with fully homebrewed station📡 Antenna, amplifier and hybrid SDR.

I've spend ages working on this. There was never any rush but at last I had the contact that has made it worthwhile. Since I took the photos I've worked another, EA6VQ.

FT8 144MHz. Another what I worked ,sorry. Antenna, amplifier, rig all homebrew.


LNB:- I bought some time ago to listen on 10GHz but never did so used it for this instead.
SDR dongle:-£10 from ebay.
Bias feed:- homemade
Laptop:-sent to me by a very generous ISP.

Email ThisBlogThis!Share to TwitterShare to FacebookShare to Pinterest
Labels: QO100

I happen across amateur radio by listening to the medium wave pop pirates of the sixties. Lots of time was spent erecting poles and long wires around the garden to try and get better reception. Evenings spent trying to wheedle out Radio Caroline from the QRM. All good fun. Fast forward fifty years.

A trip to 630 had been on my mind for while, but how?  Well I'd built a QRP-Labs U3 some time ago. That seemed an option but never fancied winding 70+ turns on those small toroids. Nevertheless if I was ever to get there that would be an easy route so one evening with nothing much on the radio I set about winding. As it happen it didn't take as long as I thought it would. Made myself a darning needle out of some 18SWG copper wire and darned away.

Well that was a transmitter for WSPR anyway. And with a small outboard amp was getting slightly more than three Watts out so all looked promising. Plugged in my twenty metre ground plane and thought "it's WSPR, someone will hear it" but how wrong could I be. Two days latter and not a single spot, clearly I was going to have to put up a dedicated aerial.

Choice of aerial was limited because of all the VHF stuff up already and there are over head power cables that run across the garden restricting long wires. The twenty metre GP was propped up in a tree so its removal and the installation of a dedicated 630 metre monopole was the only answer. Everything I read about MF aerials said keep away from buildings and trees. Ignoring that advice I set about joining together insulated 15mm copper tube and pushing it up into the tree.  I formed a hook at the half way point, 6 metres, lodging that onto a suitable branch. Hanging down form there, the bottom six metres were two lengths of hefty insulated copper wire. So there was my monopole, all twelve metres of it.


Of course twelve metres of copper in itself wasn't an aerial I also needed a base loading coil. Recommended wire for such a coil is Litz wire but that's very expensive as I'd need many metres. The next best is enamelled copper wire, also to expensive, so it would just have to be some insulated multi-stranded  wire, I have miles of that. The former would be 110mm plastic soil pipe. Required loading coil = 1209 μH.

An online calculator indicated that I would need 200 turns and some 70 metres of wire. Winding the coil was straight forward and the inductance measured pretty close to that calculated. I decided not to go to the trouble of a variometer but merely to add or remove turns as proved necessary. Measuring the antenna current is apparently the best way to tune it up but when I discovered that the second hand SX200 SWR meter indicated a reasonable match I stuck with that, just removing a dozen turns of wire from the coil resulted in a near perfect 1:1. COULDN'T WAIT TO TRY IT. Plugged in the U3 and left it running. In the middle of the day didn't expect to much so delighted to discover that the three Watts and very low ERP was a solid copy up North at 200Km with a -20db report.

Over night the U3 was being copied at 1200 Km and often up to 1500Km. Pretty good I thought. Still just transmitting WSPR and never receiving eventually proved unsatisfactory.  I really wanted to have full transceive capability.

Fallen into disuse was an old hybrid SDR with a 10.7MHz IF I had built for Two Metres. I knew it would receive LF as the mixer was an ADE1 diode ring and I had tried in the past just to see how low it would tune. LO was an Si570. Trouble with it was that it had never liked single tones,  they produced many audio harmonics, problem with the IF filtering but I never got around to sorting it.

Also in the shack was an old defunct FT790 but enough of it was working to produce a clean 10.7MHz to inject into the hybrid SDR so that is what I did. Modifications to the SDR were made, existing PA no use so removed. New one constructed for 630 from a design for a transverter found on the Internet using an IRF510. Low pass filter etc built. Testing and checking left me happy that the signal was clean and the setup was producing 8 Watts and I estimated the ERP at 80mW.


First use on air with WSPR showed the transmitted signal being heard over greater distances than the U3 and at increased signal strength. Now of course I was also spotting stations. So that was great but what I now wanted was a QSO. That was proving difficult. Although I could decode stations calling CQ none where coming back to my calls. Eventually I did have a QSO with an ON station and then a second but that's it, just two JT9 QSOs. Disappointing. Clearly if I'm going to work more I need to increase ERP!


Anyway receive seems to work very well, indeed as good as the best of them.


All in all an enjoyable trip to 630. I will continue to play with it and I must tidy up the Heath Robinson transceiver!

I've added a page with screen shots some of my EME contacts.

If we've worked you may be here.

I'll try and put them in some sort of order if I can find time.

You'll find them all here. 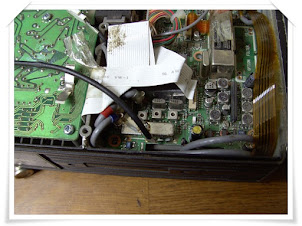 Taking the IF out for a panadaptor

Amateur radio, commonly called “ham radio”, is a hobby enjoyed by many people throughout the world; about 3 million worldwide, 70,000 in Germany, 60,000 in the UK, 5,000 in Norway, 57,000 in Canada, and 700,000 in the USA.
A holder of an Amateur Radio license has studied and passed required tests in his or her country and been issued a call sign by its government. This call sign is unique to the operator and is often a source of pride. The holder of a call sign uses it on the air to legally identify all voice and data communications.
Amateur Radio should not be confused with CB radio which is limited to voice operation, allowed lower power limits, fewer frequency allocations, and is unlicensed in most countries.